You are here: Home1 / Biography

Don Belt has traveled to 80 countries over the past three decades, working as a writer and editor of articles for National Geographic magazine. Along the way, he has covered the defining issues of our time such as environmental degradation, vanishing cultures, Islam and the West, the effects of global climate change, and the geopolitical trends that are shaping our world.  As senior editor of National Geographic from 1998 to 2010, he helped to guide the magazine’s coverage of topics ranging from weapons of mass destruction and the use of terrorism to the legacy of colonialism in the modern Middle East. 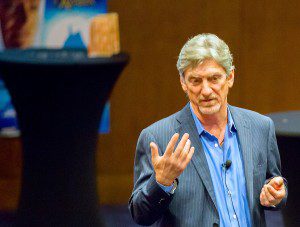 Belt began working for National Geographic as a freelance in 1981; his first story for the magazine, on Georgia’s Chattooga River, was published in the April 1983 issue. He joined the magazine’s Editorial Staff as a writer in 1985, and rose to become Associate Legends Editor in 1990, managing a staff of fifteen writers and researchers. He served as the magazine’s senior editor for expeditions for three years; its foreign editor for five. National Geographic’s chief foreign correspondent from 2006 to 2011, Belt now serves the magazine as an editorial consultant and Contributing Writer.

During his NGS career, Belt authored major articles on Russia’s Lake Baikal, Sweden, Baja California, Israel’s Galilee, the ancient city of Petra in Jordan, the Golan Heights, Lawrence of Arabia, Islam, the European Union, Pakistan, India, Syria, Arab Christians, and Cold War science in the Russian Arctic. His article about conflicts and cooperation over the Jordan River appears in National Geographic’s April 2010 issue devoted entirely to Water, which won the National Magazine Award. The May 2011 issue features his article about Bangladesh’s efforts to cope with global climate change. His story on Mongolia appeared in the October 2011 issue, and his reported essay, “Life in the Time of Jesus,” appeared in an April, 2014 special issue of the magazine. His article on Laponia (northern Sweden) appears in the October 2015 issue of National Geographic.

Belt also contributed to a number of Geographic book projects, including the critically acclaimed Atlas of North America, based on remote sensing images of the continent. He served as Editor-in-Chief of the December 2001 National Geographic book, The World of Islam, a compilation of past Geographic articles on the Muslim world, and he helped to edit National Geographic’s Atlas of the Middle East (2008). His essays, “A Land Still in Turmoil,” “Searching for Miracles,” and “Life in the Time of Jesus” appear in Geographic special issues on the Holy Land (2009), Sacred Journeys (2010), and Jesus and the Apostles (2014).

Belt has been a featured guest on many radio and television programs, including The NewsHour with Jim Lehrer, NPR’s Morning Edition, The Diane Rehm Show, CNN, Lou Dobbs’ MoneyLine, Fox and Friends, and newscasts around the U.S. and the world. He has lectured on Middle Eastern geography and politics at George Washington University and taught the craft of non-fiction writing at the Poynter Institute’s annual National Writers Workshop. He was a featured lecturer at the Chautauqua Institution in July 2012, speaking about Water issues and teaching master classes in non-fiction writing. He served as an adviser to the International Reporting Project at SAIS/Johns Hopkins University. He is a member of the Middle East Institute in Washington, D.C., and the National Press Club.

In 2014 he taught journalism at Virginia Commonwealth University’s Robertson School of Media and Culture, offering the first university-level course in the Out of Eden Walk. He now teaches in the Journalism department at the University of Richmond. He also serves as the Out of Eden Walk’s university outreach director, building a national network of educators in journalism, geography, international studies, and environmental science, and giving workshops on teaching the Walk in collaboration with the Pulitzer Center on Crisis Reporting.

Belt has received various awards for his writing, including the Award for Excellence from Communication Arts, the National Magazine Award (ASME), an award of merit from the Overseas Press Club, and a First Place award from the North American Travel Writers Association. He was the recipient of a Pew Foundation Gatekeeper Fellowship to South Africa in 2003. In 2004 he was presented with the University of South Carolina’s Distinguished Alumnus Award. He was inducted into the South Carolina Education (Richmond One) Hall of Fame in 2011, and the Virginia Communications Hall of Fame in 2013.